Very friendly, gentle, kind, can express emotions and never complains (despite secretly upset about being treated like a slave lately), but is boastful and almost always hungry

To accomplish goals of his friends and allies

Leader of the Yoshi Clan

Gets distracted by fruits easily
Cannot eat most shells (Aside from Blue, Yellow and Red Koopa Shells that grants him various powers)

Green and most of its shades

Majority of the Locked Room Gang, especially Mario and Luigi
Majority of anyone he meets aside from a group

Shapeshifter Yoshi (Throughout all seasons starting from S2B)

Yoshi is a character in the series In a Locked Room. He is one of the heroes in the Super Mario franchise, and the main protagonist of his own, the Yoshi franchise. He is a very notable ally of Mario and Luigi, although he has been an ally to any good guy or girl he meets, and doesn't hesitate to do so. He is the leader of the Yoshi Clan, and has protected his homeland multiple times. He cannot speak English, although the Staranslator from The Lumas translated his language to that. He is roleplayed by Fairy27.

Not much is known about how Yoshi ended up in the Locked Rooms. However, he is known when Mario as a baby landed on his saddle unnoticed, saving Baby Luigi and let the two brothers reunite multiple times from Kamek and his minions before the present day.

Yoshi debuts in The Wacky Bob-omb Factory, but is first seen struggling to move and fight against the Mysterious Fusion Reaper, who hunts him. Klitz heard about the noise created by the two and tries to help him escape. He kicks the countered Suction Bomb against the reaper and the two escape. Both join Voltaire in the board game.

Yoshi later uses a translator given from Luigi in the same room, but was broken later on. He is later shown eating strange foods, like in Stare into the Dragon Soul, where he eats spoiled beans that are called "Healthy Beans".

In Popping Party at the Monkey City, Yoshi encounters Mesprit, after making some creatures feel better. Mesprit knows Yoshi can feel emotions of himself and everybody, being a happy-go-lucky dinosaur, so it chose him as its Chosen One. This also somewhat reveals Yoshi thinks that Mario's hat explains most life in the world.

In multiple rooms after that, Yoshi has been shown to be friendly and equal to any ally, and doesn't mind to follow commands. Despite this, he gets a lower accuracy every time.

Yoshi has a very similar personality to Mario - brave and kind, but unlike him, he is undeveloped. He is a friendly individual who always helps in need. He is courageous and considered a hero for defeating enemies in the past and saved his island more than once. Yoshi takes a leadership position of the Yoshi Clan, but not in a political status. He also has a large appetite, and is a happy-go-lucky character.

Thinking about Yoshi would make one scream that he's so happy in any way, unless put in a dangerous situation. But this is one of the causes he becomes slowly boastful about himself. He's also getting treated like a slave slowly but surely.

Like other Yoshis, Yoshi has a long, sticky tongue that he uses to eat almost anything, even things much larger than himself. Yoshi can transform the enemies and other objects he eats into eggs, which he can then use as projectile weapons. He can also transform things that he eats into coins (Uncommon) or Star Bits (Rare).

Yoshi has a hard time swallowing most shells, but swallowing a red Koopa shell will grant him the power to breathe 3 fireballs at once, a yellow one will make him create sand clouds upon jumping and landing on the ground, and a blue one will make him have wings (Winged Yoshi).

Yoshi is very proficient with Jump and Ground Pound, abilities, rivaling the capabilities of world-renown jumper Mario. Yoshi's jump attacks were much more powerful than Mario's normal jump attacks. He could destroy most enemies in one hit. He is also a master of the Flutter Jump technique, allowing him to jump with incredible horizontal distance.

He is a speed runner (Both literally and when playing games), especially on sports and races.

Yoshi gains a lot of different forms throughout his adventures against the work of evil, most from the Morph Bubbles. 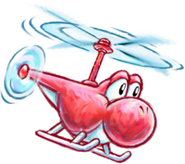 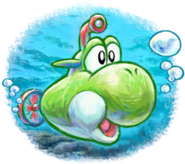 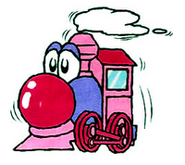 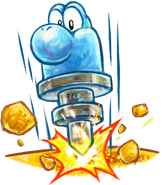 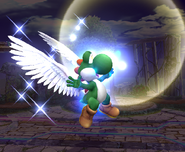 Super Dragon Form
Add a photo to this gallery

Retrieved from "https://in-a-locked-room.fandom.com/wiki/Yoshi?oldid=174342"
Community content is available under CC-BY-SA unless otherwise noted.