Doctor W. D. Gaster, commonly known as Gaster, is a monster who was formerly the Underground's Royal Scientist, and worked on several scientific experiments before he was trapped in the void. Once he escaped the void, he went back to his scientifical life, with Alphys as his lab assistant. He is the father of Sans and Papyrus, being the third main character of Sans and Papyrus' Humerus Adventures. He is played by SuperGaming101.

Gaster is a tall skeleton, who can be often seen wearing a black labcoat. He has a crack in his skull which is linked to his left eye, his left eye visibly looking more damaged than his other eye. This is due to his time in the void, which left a lingering impression on his body. His right eye and his mouth also appear to be linked with a crack. While Gaster is mostly seen wearing a frown or a neutral expression on his face, there have been times where he has been known to smile, his smile in question often looking wide and quite ominous. It is said that when he is truly enraged, or he is using his true power, his smile is even more unnatural looking than usual, looking as if it was stretched, and glitchy wingding symbols emanate from his body, while his eyes glow blue and orange.

Gaster is known to be normally serious and on to the point. Science is his main hobby, and he can be often seen tinkering with inventions or performing experiments. He talks quite directly, and can sometimes come of as quite rude to people as well, although he normally doesn't wish to come off this way. He is quite laid back and relaxed like his son Sans, not often losing his temper.

When Gaster is with Sans and Papyrus, he acts differently. Gaster cares about his children very much, and is in a much less serious mood when around them. He likes making puns with Sans and he also loves spending time with Papyrus. However, he doesn't seem to understand Sans's and Papyrus's hijinks very well, but he tries to join their conservations. It should also be noted that he can be somewhat awkward at times, attempting to crack jokes and asking if they are funny, trying to be witty like Sans. While Gaster acts serious, there is good in his heart and he cares about others, especially Sans and Papyrus. He tries to protect others if he can if they are not a threat. He wishes to help the world with his inventions, trying to make it a better place for everyone.

Sans is Gaster's son, Sans being one of the monsters who could still remember Gaster after he was sent to the void. Before this incident, Gaster was often busy and impatient, and thus he didn't spend that much time with Sans, which disappointed Sans as he loves spending time with him. Occasionally, Gaster would still show him around, much to the excitement of a young Sans. Once Gaster was presumed to be dead, Sans was heartbroken and scared, and he desperately tried to bring him back with science, following in his father's footsteps. When this didn't work, Sans eventually gave up, starting to become more lazy and nihilistic in nature. After Gaster escaped from the void, the two spend time together a lot more as the two have a great chemistry together.

Papyrus is Gaster's other son, although Papyrus doesn't have as much of a connection with Gaster as Sans does, due to the fact that Papyrus didn't remember him after he was sent to the void. Despite this, the two still get along pretty well. Gaster sometimes gets confused by Papyrus's antics, and he also has to remind Papyrus about certain things. However, Gaster doesn't mind teaching Papyrus about certain things, and he is shown to be happy with Papyrus when Papyrus shows a liking for science. Papyrus also sometimes tends to be confused with Gaster, not understanding what he means. In Chaotic Circus, Papyrus is shown to be worried about Gaster, to the point where he acts unusually mature, showing that Papyrus really does care about Gaster, and vice versa.

Gaster, like Sans, is shown to have a dislike for Chara. In the Season 1 Finale of SaPHA, (spoilers) Gaster refers to Chara as an 'insolent child', telling her to learn her manners. Gaster has no qualms with attacking Chara or even killing her, Gaster thinking she is beyond saving like how Sans does. Thus, Gaster thinks that the only mercy for her would be to kill her, not showing any empathy for her at all whatsoever.

Alphys is Gaster's lab assistant, and the two can be considered friends. Gaster seems to recognize her intelligence, although he is disappointed that she would usually rather watch anime instead. This causes Gaster to scold her, although he still doesn't fire her. Gaster felt a rare case of empathy for Alphys, letting her work as she didn't currently have a job.

Gaster's other sprite from Undertale, when he fades away 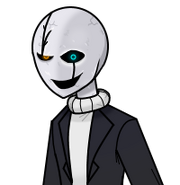 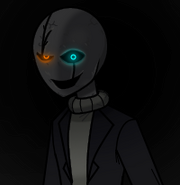 Ditto but in poor lighting conditions

PeaVZ108's depiction of Gaster in his second ABC fanart challenge 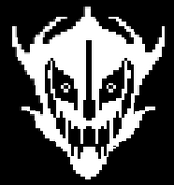 Gaster's Gaster Blaster. Notice that it is larger than Sans's and Papyrus's. The blaster's eyes also glow blue and orange.
Add a photo to this gallery

The Man Who Speaks In Hands - RednasVGM
Gaster's battle theme B.

Gaster's Finale
Gaster's battle theme when he is using his true power.

Glitchtale (S2) - Ascended - amella Original
Gaster's battle theme when he is using his true power B.
Add a photo to this gallery

Retrieved from "https://in-a-locked-room.fandom.com/wiki/W._D._Gaster?oldid=205954"
Community content is available under CC-BY-SA unless otherwise noted.