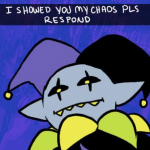 aka THE RINGLEADER OF CHAOS!

Hello! Thank you for wanting to check my profile out. I've finally returned after years and I plan to celebrate it by writing many stories, introducing new characters, and being very active on the wiki! See ya around!

Now, if you've even known me for a second, then you would know that I simply love video games. One could possibly even say that I'm addicted to them. I mean, they probably wouldn't be wrong. And my love for video games branch out to many different video game series. Here's some of them!

If a video game you like didn't make the list, then chances are I know about and I enjoy it to a certain extent. It's just that if I included every single video game I like here, then it would be far too long. So I just wanted to include the notable ones.

I'm not exactly the biggest fan of shows, but there are a handful that I do enjoy watching. Here they are:

Oh yeah, and there was also a time where I watched Family Guy, but ugh. Not anymore. It started to feel like a chore watching the episodes and jokes dragged on and on and were unfunny garbage. At least it makes for some good ironic memes.

I'm not really the biggest fan of movies, but here is some that I approve:

Here you can find my main cast of characters! I'm quite happy with my cast now, so see them for yourself!

What's that? You wanna know more about me? Um..Okay..?

Thanks for reading, people!

Wanna hear some bangers? Want some music to browse my profile to and you don't like Studiopolis Zone? (Shame on you.) Well, I've got you covered!

Retrieved from "https://in-a-locked-room.fandom.com/wiki/User:SuperGaming101?oldid=196450"
Community content is available under CC-BY-SA unless otherwise noted.