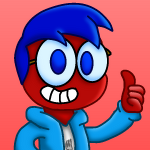 Hello! I'm really glad you decided to stop by. Redfork2000 here, I'm one of the main roleplayers in this wiki. Have fun checking out this user profile!

My username is Redfork2000, but most of my online friends call me Red or Fork.

By the way, my username is a reference to my main OC, Red Fork, and 2000 is the year I was born in. I was born in USA, but I currently live in Nicaragua. I'm fluent in both english and spanish, and I'm currently learning french with the hopes of adding a third language to the list.

However, my real storywriting began around the age of 13. I began by writing a longer story, called the Gold Fish (which is by the way, the media from which Captain Red Shell is from). I also made another story called Flying Star Cafe. That one was interesting to make, since basically what I did is recycle the idea from an old story I wrote in 2006, and turn into an entire franchise.

At the age of 15, I made my wikia account, and joined wikis such as a fanon mlp wiki, where I quickly grew as a writer, thanks to the practice with having an actual audience, and the tips I got from more experienced writers. In 2016, I joined IaLR, and in 2018, I started a stories series with PeaVZ108, called IaLR: Heroes of Echo Creek. You can go check it out if you want. It's the largest story series in this wiki!

Here are different things I like whether it's TV shows, videogames or other stuff:

(If you're interested in any of my creations, feel free to ask me in my message wall!)

Well, that's all, folks! I hope you enjoyed your time here, and learned a bit more about me. Have a great day/night (or whatever time it is in your timezone when you read this)!

Retrieved from "https://in-a-locked-room.fandom.com/wiki/User:Redfork2000?oldid=196126"
Community content is available under CC-BY-SA unless otherwise noted.