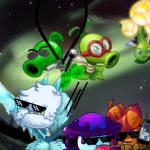 Get outta the way "Some Boring Introduction Stuff About Me (And Why Are All The Words' First Letters Capitalized In This Heading? Also, Why Is This Title So Long?)", move down, because this section is a lot more important.

So, I took quite a long break from this. I got really busy with school, and now that it's summer (well, actually, the last two weeks of summer, lol), I'm trying to get myself back into this. Although, I'm going to be a lot more stressed over the school year than last year, so I don't know what I'm thinking right now... let's just see how this goes.

I'm going to reboot my older characters somehow... I think a little timeskip and I'll just infer what happened to them, maybe a few flashbacks? I don't know. Maybe I'll write a spinoff. Nah... too much work. Anyways, I'll just incorporate a time jump, and the events that I wanted to happen but never got to write happened and took place and stuff... so... yeah...

Edit!: Actually, the stuff during the timeskip is here: Whatever Happened to T3PK?

Some Boring Introduction Stuff About Me (And Why Are All The Words' First Letters Capitalized In This Heading? Also, Why Is This Title So Long?)

Sooooo... I couldn't look at some generic template thingy here, so I decided to edit it! Here's some trivia to get us started, I actually edited this a loooooong time ago, but then, after working for like, 30 minutes on it, MY COMPUTER DIED. The worst thing that could possibly happen (internet kicking me out is 2nd) happened! Anyways, I should add stuff here, no?

First, a little about me... Like, just a LITTLE. Not enough to let you people stalk me. I don't know who's out there... Anyways, as you can see on the little bar thingy on top, I live in 'Murica. Although, as I'd said earlier I live in the USA, I'm a Filipino... AND I'M PROUD! I can be described as a Grammar Nazi. If there's a run-on sentence with no commas and stuff and it goes on forever I will probably add periods and rage and make sure it's fixed and I also want people to capitalize their i's in their sentences and use their apostrophes correctly or id rage so much that id like destroy furniture and if i do that the world will end i mean if i make run on sentences and stuff and dont add periods and dont use apostrophes correctly and stuff. So, yeah, basically, if I see ONE run-on sentence, a sentence with terrible grammar and/or verb usage, horrible apostrophe usage, and people not capitalizing their I's, I'd mutter to myself, "Gee, that person should really go to school! What are they, in middle school?" Yeah, totally not me!

Basically, in the roleplays and this wiki, I'm in charge of writing the summaries, plots, and cast of characters because I'm such a Grammar Nazi. I also know how to code, so I help with the templates, sometimes. As for actual roleplaying, I joined the IaLR roleplay series pretty late- the Season 1 finale! Wow! I know, right? Most of my plots in the episodes have really long, boring, complex subplots. Also, I oppose arguments because, seriously, what fun is roleplaying when everyone's attacking each other like little kids? Here's an example:

Kid #1's character accidentally tripped over Kid #2's character, who was stabbed in the eye.

Kid #2 exclaims, "What was that for? Oh well, he's not dead! He had a magic force field and plot armor!"

Kid #2 yells, "Oh yeah, what if I banished your character!?" Kid #2 proceeds to click the delete button.

(Regular characters that appear in most episodes.)

(Regular characters that appear in most episodes, but don't have as much of a major role/screen-time.)

(Characters that in some episodes for a period of time, but don't have as much of a major role as main characters.)

(Characters that are, yep, guests. They appear in special episodes or occasionally in a regular episode.)

Retrieved from "https://in-a-locked-room.fandom.com/wiki/User:DJayKn1ght?oldid=105957"
Community content is available under CC-BY-SA unless otherwise noted.