The Lumas are star-like creatures that appear in most rooms. Their first appearance in Season 1 of In a Locked Room is The Room of Mario Kart, while in Season 2, it's The Wacky Bob-omb Factory. They commonly appear whenever Rosalina calls out for them, but sometimes they appear on their own.

All of them have varied personalities, but all of them help their allies, and especially Rosalina.

In The Room of Mario Kart, few Lumas appear, while a selection were mentioned about Yarrow's past and how it received the translator.

In The Room of Super Mario Galaxy, the Lumas played major roles, since the said room's storyline is based on Super Mario Galaxy. Various Lumas appeared in different galaxies and the Comet Observatory itself. A Blue Luma accompanied Yarrow, who is close to it. Different Lumas in different colors gave different abilities, some were trapped, some needed Star Bits. In the end, all Lumas, even the Blue Luma and Yarrow itself, sacrified themselves into the massive black hole caused by Bowser's dying sun to neutralize it. This caused Rosalina to stay in the same room to protect the Comet Observatory until The Lair of the Dark Star, on the time some Lumas were reborn.

The Lumas appear in Season 2's The Wacky Bob-omb Factory, where a Blue and a Yellow Luma make the Mysterious Fusion Reaper disappear all of the sudden with a certain item. They also obtain the Magic Key to destroy the Magic Lock and let Rosalina's cage be destroyed itself.

Most of them were summoned in various episodes after this. In The Cloud Cuckoo Lander, Polari was summoned as well, to guide Yoshi and his Staranslator.

The Lumas come in different colors, some having abilities. 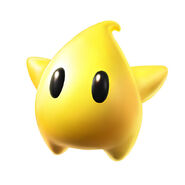 Orange Luma
Add a photo to this gallery
Retrieved from "https://in-a-locked-room.fandom.com/wiki/The_Lumas?oldid=174334"
Community content is available under CC-BY-SA unless otherwise noted.