Street Fighters, Kirby, Star vs the Forces of Evil

Boredom, cheaters, evil, dealing with virus attacks, anyone who is a threat to Eitbit

Starcade Pixelara Bitson, AKA Starcade, is a main character originated from The Portal Problem. She is a young gamer girl from Eitbit, well-known for her expert hacking and gaming skills. She is roleplayed by PeaVZ108.

Starcade has light purple straight hair, fair skin and dark purple eye shadows. Starcade wears a white singlet with light pink stars, a black cap with arcade-themed decorations, a purple jacket with a hoodie, black wristbands (each one with a screen and multi-colored buttons) on both arms, light purple finger-less gloves each with a yellow star, a belt with a yellow star on it, navy blue shorts, black socks and pink sneakers with yellow stars on each side.

She also carries with her a plushie of a certain someone

Starcade regards Green Shadow as a good friend, and is willing to help her and the gang at all costs.

Though constantly annoyed by Bonk Choy, she realises that she could not stay angry with him no matter how much he offends her. Starcade still considers Bonk Choy as one of her friends.

Re-Peat Moss falls in love with Starcade the moment they first met, to which Starcade does not mind. In occasions, Starcade too feels disheartened when Re-Peat Moss gets hurt or when he decides to sacrifice himself to save her. She even calls him "adorable" after being freed from maximum security in "Stage Two", showing that she likes him.

Starcade and Kyoji were friends in fighting when they were younger. She enjoys his company as she undergoes training from him before she gets old enough to be in the Star Fighters roster. When they reunite in "The Frost Awakens", Starcade immediately feels sorry for hurting him, showing that she cares for Kyoji. In the same episode, Kyoji also stops attacking the moment he realises that he was fighting her.

In "The Forbidden Legacy" and "Nitro Mania", it is revealed that Starcade and Kyoji have crushes on each other, to the point when their ship being canon has been demonstrated.

Starcade cared about her Star Fighter friends, but was naive into thinking that the Star Fighters missed her while she was captured in maximum security. Despite being rejected from the roster, she does not mind and sounds rather casual when announcing the news to the gang.

Originally, they were friendly competitors in an annual game championship years ago. However, as Olympus was not willing to accept his loss to Starcade, he takes revenge by taking over Eitbit and throws Starcade and her friends in his prison. Having her homeland and everything she loved dearly taken away from her, Starcade grew intense hatred to Olympus.

Starcade is usually very friendly and caring to the gemstones. While most of them enjoy her company, Red Ruby is the only one who tries to avoid her.

Starcade met the Nitrome gang, before they formed the Retro Rebels together, for the first time when the latter group was seeking refuge in Eitbit from the wrath of the Nitrome Boss. She was more than willing to take them in, and in return, they formed the Retro Rebels with many other Eitbitizens. Starcade became their leader and Test Subject Blue became their assistant leader. As leader of the Retro Rebels, Starcade treats her teammates with care and friendliness, willing to take most of the responsibilities to account for her teammates' actions, as shown in Nitro Mania. Test Subject Blue has also mentioned that he is Starcade's biggest fan.

Both characters interact well with one another. It has been implied that they have been playing video games together, as they both love video games.

Electra and Starcade are similar, since they are both computer experts. However, both girls have a deep rivalry between each other, as pointed out in several stories.

Starcade sees Dark Starcade as just another clone and doesn't really take the latter seriously, unless it concerns her friends.

Cuboy once had a crush on Starcade, but due to a certain misunderstanding in the past, he grew bitter towards her and joined forces with Olympus. In "Cuboy and the Nitro Maniacs", their relationship starts to recover after the misunderstanding between them has been cleared up.

Starcade has a very high intelligence stat that few characters are capable of rivaling, being able to outsmart many characters especially those of lower intelligence. She also has an above average damage output thanks to melee attacks enhanced by her pixelated energy and her laser pistols. Besides that, she has decent mobility, HP and stealth but falls on defense.

According to IaLR: Tier Lists - Retro Characters!, Starcade is in the B tier. While she does not have stats as high as other B tiers, she does not have many counters and is able to deal a lot of damage to her opponents quickly and even if this does not work, she can take advantage of her superior intelligence to outsmart any opponents that she may struggle against. 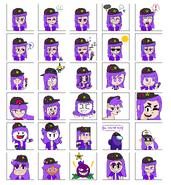 Retrieved from "https://in-a-locked-room.fandom.com/wiki/Starcade?oldid=205624"
Community content is available under CC-BY-SA unless otherwise noted.