Laid back, chill, but can be serious at times

Sans is a skeleton Monster who originally lived in Snowdin and is currently living in Echo Creek. He is one of two main characters in SuperGaming101's cast, the other being his brother Papyrus. Sans and his brother are also the main characters of their own series, Sans and Papyrus' Humerus Adventures. He was owned by SuperGaming101 but was given to CaptainRustbolt21, who would later return ownership back to him.

Sans is quite mysterious. What we know about him is that he is Gaster's son. It is unknown if Gaster created Sans in a lab experiment or not. What is known is that Sans was born before his brother, Papyrus. When Gaster was presumed to be dead, Sans attempted to bring him back with science, although it never worked, and so Sans eventually gave up, leaving Sans and Papyrus as orphans, forcing Sans to have to 'raise' a younger Papyrus.

In Undertale, Sans lives in Snowdin with his brother. He can be seen talking with Papyrus when Papyrus attempts to capture Frisk with some puzzles. Towards the end of the game, Sans judges Frisk based on their actions, and if they are doing the Genocide Route, Sans fights them with all of his power to avenge monsterkind.

In The Room of Super Smash Bros, Sans easily managed to beat Super Monkey. After beating Super Monkey, he was up against Sonic the Hedgehog. They had a pretty close battle, but it ended when Sans got a Smash Ball and used his Final Smash on him. Soon after this, everyone revolted against Master Hand, causing the event where everyone knocked out got turned into a Trophy and turned evil. Sans helped out the gang against the evil versions of the knocked out characters.

In the Season 1 finale, Sans's SOUL was absorbed by Flowey the Flower, and he was revived when Asriel Dreemurr had given his SOUL back. Sans then noticed that someone was staring at him, but left the rooms anyway.

Sans is a short skeleton wearing a white shirt, blue jacket, black-and-white shorts, and a pair of white slippers. He normally has white dots for eyes, but when he is serious, they disappear. When he is using his telekinesis, his left eye glows bright blue and yellow.

Sans is a lazy, laid back and calm skeleton. He loves making puns and pulling harmless pranks on those around him. He is also quite friendly, being 'not much for fighting' as he says in A Hive of Trouble. He also likes to break the fourth wall quite a lot. He is nonchalant about a lot of things, as he doesn't care when he is booed by the crowd in Showtime Surprise, shrugging in response.

However, what lies under Sans's calm and comedic demeanour is an overprotective nihilist. Sans's laziness seems to be a side effect of his nihilism, as he believes that everything he does really doesn't matter in the end, a trait he carries over from Undertale. He hides his nihilism from everyone, including his own family, as he doesn't want them to worry about him. He also spends a lot of his time at Grillby's, a bar, and as shown in Double Trouble, he has drank in the past. When he is not seen at Grillby's or spending time with Papyrus or W.D Gaster, he can most likely be seen at his home, watching TV and sleeping. In Double Trouble, it is shown that the loss of Gaster, his father, affected him a lot more than what he lets on. At this point it is unknown if Sans has depression or is just nihilistic in nature.

He is very overprotective of those who he is close to, especially Papyrus. As Sans raised a young Papyrus, he raised Papyrus in a way that he would stay innocent and child-like. This is why Sans still reads Papyrus bedtime stories, and why Papyrus thinks that 'babies are delivered by storks.' It is also possible that Papyrus was raised this way due to Sans not being an adult and having no experience with raising children, at the time. Sans constantly tells lies, so that Papyrus won't feel sad or disappointed. Sans also tends to bottle up his emotions, something he does so that yet again nobody will worry about him.

However, Sans does appear to still have somewhat of a postive outlook on life. In Double Trouble, Sans says that Papyrus never gives up, and that he always tries his hardest, and so Sans tries his hardest too. Sans tags along on adventures with Papyrus so that he can protect him. This is also the reason why he originally joined the Locked Room Gang. He seems to have anxiety about Chara, as he knows full well that she won't hestitate to kill Papyrus or Gaster, something that he dreads, as he can be seen losing his cool when Papyrus approached her in Brawl on a Vanishing Island.

While Sans is well known for being calm and collected, he can get serious as well. While he is almost never serious around Papyrus, he is normally dead serious around those he hates, such as Chara, telling her to 'burn in hell' and referring to her as a 'piece of trash'. Sans's pupils disappear in his serious state, leaving only his hollow black eyes. Unlike Papyrus, Sans would kill Chara if he had the chance, not forgiving her for all the atrocious murders she has committed.

Sans also has somewhat of a scientific background, much like his father. He sometimes helped Gaster with his science projects, Gaster teaching him many important aspects of science. Once Gaster was sent to the void and presumed dead, Sans desperately attempted to bring him back with science, but to no avail. Sans then intended to become a scientist to follow in his father's footsteps, but he eventually grew too lazy for the job and he abandoned his dreams.

Sans only has 1 HP and 1 DEFENSE, so he can die in one hit from any attack. The catch is that he's nearly impossible to hit.

Sans's stats are mostly focused on speed, to make up for his terrible defense and HP. Because of this, Sans can easily dodge any attack that gets thrown at him, making it very difficult to land a hit on him. Sans also displays an impressive amount of intelligence, as he knows about alternate timelines and RESETs. It is also possible that Sans has once worked in The True Lab with W.D Gaster before. He can also work out a plan or a strategy in a battle, such as doing nothing against Chara, not allowing her to attack. Sans also has a large selection of attacks under his belt, such as Gaster Blasters, bones and telekiness just to name a few, making Sans a strong fighter. Sans can also be quite sneaky at times, being to easily sneak up on Frisk in Undertale, and he can also teleport to get around. Basically, Sans is a powerful fighter who can easily catch you off guard and is A tier at least.

Papyrus is Sans's younger brother, and they care deeply about eachother. Sans constantly refers to Papyrus as 'cool' and clearly loves his company. He loves cracking puns and pulling harmless pranks on Papyrus, with Papyrus occasionaly making puns as well, although usually unenthusiastically. As shown in his origin game, Sans gets angry with the player if they kill Papyrus. Sans is also very protective of Papyrus, like in Brawl on a Vanishing Island where he tells Papyrus to leave, sacrificing himself so Papyrus can be safe from Chara. Sans also tends to lie to Papyrus about certain things to make him feel better, not telling him the truth.

Gaster is Sans's father, and they share some history with eachother. Sans loved spending time with his dad, as Gaster sometimes let Sans help with his projects, and in return Gaster taught him some of the ways of science. However, Gaster also often pushed Sans away, as he was often too focused on his projects, and he didn't want Sans to get in the way of his work. When Gaster was sent to the void and presumed to be dead, Sans was heartbroken, scared, and confused, as he lost his father as a child. Because of this, Sans and Papyrus both became orphans. Sans is one of the only people to even remember Gaster after he was sent to the void, Papyrus not having any memories of him. This is probably when Sans's nihilism started, as he dearly missed his father, even turning to science in an attempt to bring him back. Once Gaster finally returned, Sans was overjoyed, and he was happy to see him back. The two often make jokes together and they have a good chemistry. It should be noted that Sans rarely refers to Gaster as 'dad', and that he often calls him 'G' instead. This probably implies that Sans doesn't really feel a father-son connection with him anymore since he was in the void for so long. Despite this, the two get along greatly.

Toriel was friends with Sans, even if they never properly met in person. They often shared puns at the door to The Ruins. When Toriel died, Sans was upset with The Gang, and is still affected by her death to this day, which is shown in the final part of Double Trouble.

Sans is friends with Alt Papyrus, and the two ended up drinking together. The two worked together to free their brothers from Omega Temmie, and they look forward to seeing eachother again.

Sans depises Chara, having a deep hatred for her because of her selfish murders. He is truly disgusted by her, believing that she deserves to go to hell. Sans refers to her as 'a piece of trash', showing how low he thinks of her as. Sans seems to fear Chara, or at least he fears the thought of her killing the ones he cares about, as he knows full well that she wouldn't hestitate to kill Papyrus or Gaster. He wants to stop her filthy path of genocide, because he doesn't want to allow any more monsters or humans to be slain. This means that Sans would kill her if he had the chance, refusing to give her a second chance, very unlike Papyrus. 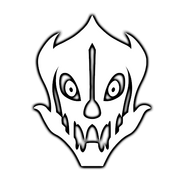 Sans with his glowing eye 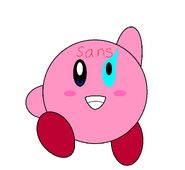 Sans if he was swallowed by Kirby, drawn by PeaVZ108

PeaVZ108's depiction of Sans in his second ABC fanart challenge

{{U|ItzXenos}}'s depiction of Sans for his ABC Fanart Challenge

Redfork2000's depiction of Sans in his ABC fanart challenge

Sans as a Lost Soul in Undertale, showing his nihilism.
Add a photo to this gallery

Retrieved from "https://in-a-locked-room.fandom.com/wiki/Sans?oldid=205857"
Community content is available under CC-BY-SA unless otherwise noted.