Unknown, although currently guessed to be over centennials old

Watching over the cosmos and the Lumas, while guiding them at the same time
Storytelling
Making gowns
Various sports
In most occasions, racing

Anything related to the nature of the cosmos

Doing her duty
Befriending characters and creatures that are not evil

Jumping
Can use the spin attack

Unnamed mother (Who protected the Lumas in the past)

Majority of the Locked Room Gang

The Room of Mario Kart

Princess Rosalina Cosmique Estela is a character from the Super Mario series, debuting in The Room of Mario Kart. She is the Princess of the Cosmos, and her duty is to watch over them. She also serves as the adopted mother of The Lumas. She is owned by Fairy27 in the main series as her third main character, but also by JeloJellyJam in stories and as three the alternate universe versions of herself, most notably Rosie.

(From the Mario Wiki)

Rosalina's story begins when she meets a young Luma in a rusted spaceship, where they rebuild spaceship to go search for the Luma's mother. They traverse through the space, encountering comets, asteroids, and Star Bits. Rosalina then starts to miss her mother, but the two begin to build a new home that would eventually become the Comet Observatory. As she and the Luma build the home, Rosalina takes more Lumas under her wing. After they see their 100th comet, Rosalina looks back at her home planet, which then causes her to feel greatly upset and homesick, and then comes to terms with the fact that her own mother is dead. The young Luma who traversed with Rosalina tells her that her mother is always part of her, and then transforms into a comet that can traverse to Rosalina's home planet. Rosalina then declares that she and the Lumas are her family now, and goes back to her home planet every once in one hundred years.

Rosalina ended up in the Mario Kart room, but there was no explanation as to how. She actually races well overall in the whole room. In The Room of Star Wars, Rosalina went straight to the next room, The Room of Super Mario Galaxy, and waited for the others. She plays a supporting role in the said room, like her game counterpart. She stays in the Comet Observatory, watching over space, waiting for the missing Power Stars. She also stayed there to protect the said area.

She returns in The Lair of the Dark Star for the final showdown, but a barrage of spikes launched by the Cursed Shroomers killed her by accident. The weapon was supposedly used as one of the last resorts. She turned into Starlight Shroomer, but was revived later on.

Rosalina briefly appears in Crystal Ski Caverns and enjoys breaks in there. She teleports from time to time in the mountain. However, in Region for the Sky, Voltaire remembers how Rosalina got captured by the Mysterious Fusion Reaper in the previous room while being distracted.

She appears again in The Wacky Bob-omb Factory but is captive on a cage by the Mysterious Fusion Reaper. After commanding a Yellow and Blue Luma to obtain the Magic Key on her Magic Lock, she gets herself free and joins Voltaire and her two companions on the Factory Walker.

In Mass Attack's end, she gets called out by Uxie, the "core" of the combined Heroic Hearts. It chooses Rosalina because of her vast knowledge, which could be used to defeat the Mysterious Fusion Reaper once and for all. However, because of her "disappearance" from it, this caused Luigi to be suspicious at her.

Rosalina never reveals her full name, but she accidentally dropped her Driver's License, that was issued on November 12, 2007 and will expire on February 15, 2027, making anyone who saw it while it was on the ground discover her full name to be "Rosalina C. Estela", the "C" standing for "Cosmique". This occurred while she was touring the Lumas to the Power Factory, and they consider it their favorite place to play, resulting to her visiting there often. She also visits other places for the same purpose, but this activity is decreased lately, as she explores the entire galaxy instead.

In 2010, she won "Suburbia's Best Dressed Gown" award, showing that she participates fashion models before, but has stopped doing so lately, like touring with the Lumas.

It has been theorized that Rosalina and Princess Peach are relatives due to their similarities in appearance, but this has proven to be false. Even though Rosalina knows Princess Peach, she doesn't really care about her at first, yet treats her as a "special one" in the universe. However, when she first met her in person, she quickly gained respect. When she first met Princess Daisy on the other hand, she didn't like her too much, but still cares for her. She usually teaches her the ways of becoming a princess in the humble way.

Rosalina is right-handed, but she wants to use her left hand often at the same time so she may use that side in holding things. She commonly holds her wand with her right hand and sometimes the left hand as well.

Rosalina strongly cares for her mother, as she constantly dreams about her, and finds it difficult to move on. In turn, the Lumas help her to cheer up. A Luma named Polari is her most trusted adviser in a similar manner with Toadsworth.

Rosalina's emblem is portrayed to be a Grand Star.

Rosalina is a generally wise, kind, and a mature character. She has an intimate knowledge of the universe and cares deeply for the Lumas, where she assumes the role of the total caregiver for them. Her outward strength and inner sorrow are likely due to the loss of her mother. Rosalina is a calm and reserved character, and often takes pauses when she explains how the universe works.

In addition, Rosalina is a storyteller to mainly the Lumas, much to their enjoyment and fun, or even tell those stories for bedtime. She knows it was for the best of them and she thinks they can affect their lives for their great future. When she tells stories to others, she usually does it to entertain them, but they can also learn from those stories.

Rosalina has a lot of powers on her sleeve with and without her wand, making her a very powerful figure. She is able to use her powers to surround the observatory in a force field, transforming it into a starship as a form of transportation. Also, she can be protected by a force field that resembles a bubble. Rosalina constantly floats, even though she prefers to walk on the ground for the most part. She can teleport herself or anyone, at least from space to Earth, and also in short distances. She can create giant hologram-like projections when necessary and change her height. She has unlimited telekinesis in time, but limited in distance. She can speak through telepathy in a far distance. She creates shooting star showers and notably Launch Stars. She can control the gravity but cannot control it if it's getting manipulated by something or someone else, as she needs to defeat that "something" or "someone" first.

She has the natural ability to jump, and can use the spin attack on enemies.

In addition to these, Rosalina can use her wand to shoot a Luma (Luma Shot), create a Launch Star on herself to get launched further (Launch Star), commands Lumas to shoot Star Bits as projectiles (Star Bits), drags objects and Lumas near her and at the same time protects her from projectiles (Gravitational Pull), and lastly, creates a Grand Star as the finishing blow (Final Smash being Grand Star). 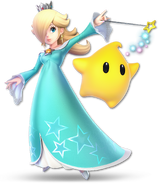 With a Luma (Super Smash Bros. Ultimate official artwork)
Add a photo to this gallery

Retrieved from "https://in-a-locked-room.fandom.com/wiki/Rosalina?oldid=180343"
Community content is available under CC-BY-SA unless otherwise noted.