Creates illusions so powerful that they're practically real

The Phantom Ruby is a powerful gemstone that can create powerful illusions that can also affect reality. There are two types: The Prototype ruby, which only works with the one who first touched it. Most of these were destroyed, but one is still in fruition. Then there's the Finalized ruby. This one is powerful enough to render all other rubies useless, and can be used by anyone. This one is currently in possession of Infinite. 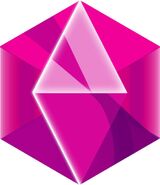 Retrieved from "https://in-a-locked-room.fandom.com/wiki/Phantom_Ruby?oldid=179074"
Community content is available under CC-BY-SA unless otherwise noted.