Unknown, probably in his 20s

Papyrus is a skeleton who might be considered the most innocent character in the series. He was owned by SuperGaming101 but was given to CaptainRustbolt21, who would later return him again.

Like Sans, there is also not much known about Papyrus's history. However, what we do know about his past is his father is W.D Gaster. A freak accident happened with one of Gaster's experiments, causing him to be lost in the void for a very long time. It's possible that Sans took care of a young Papyrus after this accident. Papyrus also doesn't remember Gaster as he was erased from existence, while Sans does.

During the events of Undertale, the player (playing as Frisk) encounters the brothers, Sans and Papyrus, in Snowdin. Papyrus attempts to capture Frisk, but he fails and he eventually gives up. Because of the player's power to reset, Papyrus kept going through the events of Undertale over and over again until finally being killed by the player in the Genocide Route. However, Frisk managed to take control of themselves and they reset the game, reviving Papyrus. Papyrus continued to live in Snowdin for a while, even when Flowey the Flower left the game for the locked rooms, causing some strange anomalies in the game.

Papyrus is a tall skeleton who wears armor that has a white chestplate with gold trim, orange-red gloves with gold trim, blue briefs with a golden belt, knee-high, orange-red boots, and a red scarf. His skull is more vertical and geometric and his eyes lack pupils and resemble vertical slits; his skeletal pseudo-brows form most of his expressions. He has eyeballs that show at times when he is experiencing strong emotions, although some consider this to be only a joke.

Papyrus is a flamboyant skeleton who presents a confident, charismatic image of himself. He works hard and, despite his brash personality, is kind at heart. He is optimistic and innocent even sometimes when he is about to get killed, as he believes in everybody that they can just be a good person if they really try. He is also occasionally stupid but he can also think up great ideas at times. He can also tend to brag about himself and his own achivements, overexaggerating, such as claming to be a celebrity and being an expert chef. It's possible that he does this so that more people would want to befriend him, as he loves to make new friends and he is always loyal to his friends. Papyrus doesn't like killing, as he thinks it is wrong, and so he refuses to do it under any circumstance. However, Papyrus doesn't mind fighting as long as nobody seriously gets hurt, thinking that a fair fight can be fun.

As seen with his brother, Papyrus despises laziness, and is very productive himself. This often causes Sans and Papyrus to get into arguments, although it's usually only harmless bickering, as Papyrus attempts to make Sans more productive. Papyrus enjoys puzzles, popularity, and of course, cooking spaghetti. He believes that everyone loves his spaghetti, when in reality everyone only pretends to like it to not hurt his feelings. This shows that Papyrus is usually unaware and oblivious of the truth in situlations. Papyrus is also very forgiving, forgiving even villians (for example Chara for their sins, while attempting to reform them into better people. Papyrus is also more emotional when compared to Sans, crying when he believed Sans was dead in The Room of Clash Royale, and also getting frustrated with Sans's puns and pranks, while Sans almost never shows emotions.

Papyrus first appeared in Snowdin in the Undertale Locked Room. He attempted to stop the gang with puzzles to capture them so that he could join the Royal Guard, as he believed they were humans because they told him that they were humans, as Sans requested. At the end of the Undertale Locked Room, he was eager to join the Locked Room with the gang to go on adventures with them, as he loves adventures. Sans tagged along to make sure Papyrus was OK. In The Room of Star Wars, Papyrus quickly became friends with his future self. In the Room of Super Mario Galaxy, Papyrus was eager to save Milo and Melissa.

In the Room of Clash Royale, Papyrus got really shocked and heartbroken when he saw that Sans was killed and turned into a Killer Robot by Necrola.

In The Lair of Dark Star, Papyrus manages to survive against all of the bosses. He was the one that convinced Asriel Dreemurr to stop fighting the gang the most.

In Face the Music, Papyrus was not affected by the disco music due to not having ears.

In Region for the Sky, Papyrus sends out his Victini to fight Guzzlord.

In The Wacky Bob-omb Factory, Papyrus didn't fight back against Chara, convinced that she can be a better person.

After a long time, Papyrus returns to the rooms with Sans in Chilling Night.

Sans is Papyrus's older brother, and the two share a close bond. They tend to bicker and get into a lot of shenagians, often started by Sans annoying Papyrus, but things are always okay in the end. Papyrus dislikes Sans's laziness, wishing he could be more productive. Despite this, Papyrus still loves Sans as a brother and cares about him a lot. He was in disbelief when Sans transformed into a Killer Robot in The Room of Clash Royale, crying, and he was relieved once Sans was reverted back to normal. Sans is one of the people that Papyrus spends the most time around, and are usually inseparable. He gets upset when Sans doesn't let Papyrus help him in Brawl on a Vanishing Island, showing that he wants to show that he is a good brother to Sans.

Gaster is Papyrus's father, and the two enjoy eachother's company, although Papyrus doesn't know Gaster too well. Papyrus, like many others, forgot about Gaster when he was erased from existance, only knowing about him from Sans. Papyrus doesn't refer to Gaster as his dad often, as he doesn't feel a father son connection due to Gaster not being in his life for so long. Regardless of this, Papyrus still loves him and vice versa.

Unlike others, Papyrus sees good in Chara, believing that she can be good if she just tries. He wants to help Chara stop her evil deeds, "teaching her a lesson in kindness". Papyrus doesn't want to kill or even hurt Chara, and he views her as a friend he hasn't made yet. In Brawl on a Vanishing Island, Papyrus reveals Chara's soft spot, and Chara temporary spares him, allowing him to escape with his life along with Sans and Gaster. However, other than this, Chara sees Papyrus as an obstacle that is in her way, and she won't hestiate to kill him. Chara refers to Papyrus as 'foolish and arrogant', saying that his blind faith in the goodness of others will lead him to his demise. 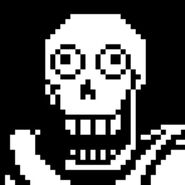 Papyrus when he is surprised, showing his eyeballs.

PeaVZ108's depiction of Papyrus in his second ABC fanart challenge

Redfork2000's depiction of Papyrus in his ABC fanart challenge

Papyrus's offical art.
Add a photo to this gallery

Retrieved from "https://in-a-locked-room.fandom.com/wiki/Papyrus?oldid=206030"
Community content is available under CC-BY-SA unless otherwise noted.