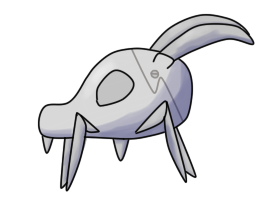 Necromites are small robots designed by Necrola. They turn killed characters into Killer Robots. The only way to revert one who turned into a Killer Robot is to tear this out of their chest.

The Necromite was designed by Necrola in the future. She travelled back in time to The Room of Star Wars to use them. She was able to obtain infinite amounts by using Cloners. Throughout the rest of the rooms, she sent these to robotify corpses.

It is unknown what happened to them after the death of Necrola. However, it's presumed that they're still roaming around, but completely neutralized without their master controlling them.

As revealed in Isolation Point, a mysterious figure got ahold of some of them, and used them to create C-R-E-E-P.

Retrieved from "https://in-a-locked-room.fandom.com/wiki/Necromites?oldid=179164"
Community content is available under CC-BY-SA unless otherwise noted.