To destroy Sonic the Hedgehog once and for all

Eggman's Robot to do what he wants, to destroy Sonic the Hedgehog

Dr. Eggman most of the time

Sonic the Hedgehog, Tails the Fox, and Knuckles the Echinda, Mecha Sonic

Metal Sonic looks like Sonic a bit, except extremely robotic. He has a different shaped head, has sharper ears, has yellow instead of peach as a secondary color, has black sclera and red irises.

Metal Sonic's personality is the opposite of Sonic's. He is an extremely unkind, unforgiving ruthless coldhearted killer dead set on what he wants. He despises Sonic very much, some may even say even more than Dr. Eggman.

What happens when Eggman thinks of fighting fire with fire? Metal Sonic! Metal Sonic is a powerful robot with a large arsenal of dangerous abilities, including being as fast as Sonic! But you should be weary of his copy ability..If you let it get out of hand, he'll show you what he's made of!

Metal Sonic was constructed by Eggman to rival Sonic's incredible speed and power. He has fought Sonic many times, although every time he has been beat, although some times he got really close.

Metal Sonic came with Eggman to the Locked Rooms to help him take over the rooms.

Metal Sonic possesses many dangerous abilities. He has super speed, super strength, can fly, can teleport, is capable to use the powers of Chaos such as Chaos Control and Chaos Rift, has a shield he can use whenever he wants, can do Sonic's abilities such as the Spin Jump and Homing Attack, can charge up an powerful overdrive attack, and can shoot powerful giant big laser beams from it's chest. However, Metal Sonic's most powerful ability would have to be his power to copy anybody he see's abilities. He can transform into stronger forms with this, such as Neo Metal Sonic and Metal Overlord.

Metal Sonic wants Sonic dead, and will do anything to make sure he will die a painful death. Metal Sonic thinks of Sonic as nothing more than his 'loathsome copy', and that he is the one true Sonic. Destroying Sonic is Metal Sonic's one true goal.

Eggman is Metal Sonic's creator, and gives him orders. Metal Sonic usually does what Eggman wants, although there has been some times where Metal Sonic went crazy and betrayed Eggman, even almost killing him once if it wasn't for Sonic and his friends.

Metal Sonic really hates Shard, as he sees him as a horrible knock-off of himself, even though Shard came first. They share a rivalry similar to Metal's and Mecha's rivalry. 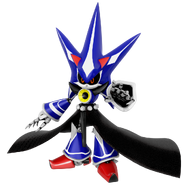 Metal Sonic battling Shard.
Add a photo to this gallery

Retrieved from "https://in-a-locked-room.fandom.com/wiki/Metal_Sonic?oldid=204935"
Community content is available under CC-BY-SA unless otherwise noted.