To become a God

The suffering of others, gaining power

People who stand in his way, losing

Mecha Sonic is a destructive robot built by Dr. Eggman to destroy Sonic. After being abandoned due to being too weak, he escaped and deleted Eggman from his programming, meaning that he has no master. He's constantly looking to harness more power so that he can become a God, killing every innocent in his way. He is owned by SuperGaming101.

Mecha Sonic was origanally a robot created by Eggman to kill Sonic. He faced him at Sky Sanctuary Zone, but was beaten easily. He survived the battle, and he went on to engage with Knuckles, transforming into his super form from the Master Emerald, although he lost this battle too. Mecha Sonic was considered to be useless by Eggman due to how weak and ineffective he was, words that Mecha Sonic would never forget. Mecha Sonic was held inside of a capsule, never to be used again.

See the bottom of the page.

Mecha Sonic is about as cruel, brutal, and cold blooded as one can get. Mecha Sonic has no respect for any other life, and he doesn't have any regrets about killing them. Mecha Sonic will often make sure he kills his victims in the most slow and painful ways, and he has no limit to how far he will go to torture them. He is extremely sadistic in the sense that he enjoys the suffering of others, and he attempts to make them feel as helpless as possible. He is normally calm and thinks quite clearly, although he does sometimes yell at times, such as when he yells one of his catchphrases, 'I'LL CRUSH YOU!' He also has trouble coming to terms with his defeat in Robo Double, being in denial. Mecha Sonic loves nothing more than power, and can be considered a megalomaniac. Finally, Mecha Sonic also has a massive ego, and he has a god complex, constantly underestimating his opponents which may end in his defeat.

At first glance, Mecha Sonic's stats are terrifying, rocking a devastating 80 power & defense stat. This means that Mecha Sonic hits like a truck, while also being very hard to harm. His HP is also high, but not quite as high, making him even harder to kill. Because of this, Mecha Sonic can take hits and shrug them off as if they were nothing, without even flinching. His intelligence is also quite high, as he not only managed to terminate his master's control over him, but he also upgraded himself with spare parts. However, Mecha Sonic's intelligence during battle is another story, as Mecha Sonic is so egotistial he always underestimates his opponents, often forgetting their powers and he often uses attacks that take a very long time to prepare. In his Death Battle against Metal Sonic, this led to his demise. Quite possibly Mecha Sonic's biggest weakness is his low speed, despite being modelled of Sonic. This means that while his attacks are very powerful, he can have quite a hard time hitting his opponents due to his low speed. His lowest stat is his stealth, as he tends to make a loud clanking noise as he walks and he would rather show up in style, than sneaking.

While Mecha Sonic was sealed inside his capsule, he plotted on how he would escape and how he would show the world how powerful he could really be. With so much pent up rage and anger, he managed to break the capsule after many years. He then flew out of Eggman's lab, and he upgraded himself, adding a machine gun among other things with nothing but his intelligence. He also managed to steal the Master Emerald, this time beating Knuckles unconcious, stronger than ever. From this day on, he would offically be named 'Turbo Mecha Sonic'. At this point he detected a massive surge of power from the Locked Rooms. Desperate for more power, he went inside, and found himself in Humanimation. He found The Gang and engaged them, requesting that they give him the Chaos Emeralds.

Mecha Sonic breaks into a secret meeting between Dimentio and Ripto. He threatens them, but Dimentio gives him a virus that makes Mecha Sonic go to sleep, which also makes him their slave. Mecha Sonic gets shoved into an escape pod and sent back into Humanimation, flying down on the gang, deactivated. However, Mecha Sonic eventually reactivates himself, but he now works for Dimentio. He comes back to the meeting, but this time as a servent. Mecha Sonic puts Ashley's wand inside his storage system. Mecha Sonic during this time talked like a regular robot with no AI, because of the virus.

Mecha Sonic flies back to The Gang, insulting a few of The Gang, and is about to take Papyrus until Mewtwo stops him. However, Mecha Sonic takes Mewtwo instead. Mewtwo gets seeded, turning into his evil alter ego, Shatter. Mecha Sonic then flies to Mass Attack.

After a long absence, Mecha Sonic finally makes his return in Popping Party at the Monkey City, ambushing The Gang alongside Shatter. Mecha Sonic and Shatter both start charging up an attack, but it is revealed that Mecha Sonic was simply never affected by the virus and that he was just acting. He then betrays Shatter, and is about to hurt him severely with his rocket launcher until Mew jumps in the way, knocking her unconcious.

Because of this sight, Shatter reverts back to his regular self, free from the mind control. Mewtwo fights Mecha Sonic along with The Gang, and The Gang wins mostly thanks to Mewtwo's rage. Mecha Sonic swiftly escapes the scene, not to be seen again until part 10 of Time Trouble.

In Part 10 of Time Trouble, Mecha Sonic appears with Mewtwo. Originally, they were captured by Star Dream, although that has since been retconned.

Mecha Sonic makes his final appearence in Season 2 in Pirates of Solitaire, arguing with some other villians such as Metal Sonic, Star Dream, and Chara.

Mecha Sonic made his first story appearance in Robo Double. Mecha Sonic rebuilds the Death Egg, trying to lure Sonic inside so he can steal his Chaos Emeralds. Sonic, thinking Eggman was back to his old tricks again, takes a shuttle to the Death Egg, and he gets trapped in a tube by Mecha Sonic. Mecha Sonic steals Sonic's Chaos Emeralds without him realzing, before asking Sonic how he would like to die. Mecha Sonic then punched a hole in the tube Sonic was contained, but Sonic managed to escape through the hole, and he combos Mecha Sonic easily, thanks to his speed. Mecha Sonic, sick of how the battle was going, transforms into his super form, becoming invincible to Sonic. Mecha Sonic then attacks Sonic horrifically, brusing him and leaving him battered. Mecha Sonic kicks him all the way down to Angel Island, and Mecha Sonic taunts him, saying that nobody would save him, and he kicks Sonic down to Hidden Palace Zone.

Luckily for Sonic, the Super Emeralds were here, and Sonic managed to take one of Mecha's Chaos Emeralds and he used Chaos Control. Sonic then says an ancient prayer while messing it up once, causing the Super Emeralds to break free and to circle around him, transforming him into Hyper Sonic! Hyper Sonic easily manages to take his Chaos Emeralds back, causing Mecha to go back to his base form, allowing Sonic to kick him into the Death Egg!

Mecha Sonic had the luxury of particpating in the first episode of Death Battles. However, this is where his luck ends, as he lost the battle. The battle begins with Mecha Sonic searching for the Chaos Emeralds. His search leads him to encounter Metal Sonic, who has the final Chaos Emeralds. They insult eachother before finally engaging eachother in combat. Mecha Sonic had trouble against Metal Sonic, due to his speed. When Mecha Sonic attempted to shoot Metal with his rockets, Metal Sonic absorbed them with his Black Hole Shield and he transformed into Overdrive Metal Sonic. Overdrive Metal Sonic was too powerful for Mecha, damaging him badly. Mecha Sonic stole the last Chaos Emerald from Metal Sonic, transforming into his super form. Super Mecha Sonic wiped the floor with Metal, damaging him severly until leaving him on the ground to finish him with a charged attack. However, Metal Sonic absorbed the attack with Black Hole Shield, and became Metal Overlord. Metal Overlord froze time with Chaos Control and he destroyed Mecha Sonic, ending the battle.

If you run into Mecha Sonic, then it might as well be your last and most painful moments alive. Mecha Sonic is extremely sadistic in the sense that he loves destroying people and ripping them apart, as he was never programmed to have emotions. However, he has a weakness. Mecha Sonic is extremely slow, and so you can easily make quick work of him with pure speed! But, just don't let him transform into his super form, or else he'll crush you! 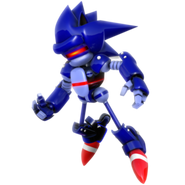 Metal Slug 5 OST Fierce Battle -Boss- (EXTENDED)
Another battle theme for Mecha Sonic. This one's more fitting for his base form.
Add a photo to this gallery

Retrieved from "https://in-a-locked-room.fandom.com/wiki/Mecha_Sonic?oldid=204355"
Community content is available under CC-BY-SA unless otherwise noted.