To be added soon

The Room of Super Smash Bros

After the events of the first four Super Smash Bros. games, Flowey the Flower decided to look for villains that could help him get rid of the gang and escape The Locked Rooms. He went on villainshire.com and Master Head was the first result. Flowey was interested in his abilities to make anyone fight, and so Flowey requested Master Head to do that. Master Hand agreed to it, at a price of 5000 gold.

Master Hand is basically just a giant hand wearing a white glove. A bit of his arm can be seen.

He likes some good tournaments to watch. He is quite confident. He loves getting to play things like puppets. However, he is also somewhat fair.

Master Hand explained the tournament to the gang in The Room of Super Smash Bros, and then forced them to join it. He is the one that drops items, and overall manages the tournament.

He doesn't have any items, but he has a lot of abilities to make up for it.

Master Hand has a lot of special abilities.

A very long time ago, there was a legendary ultra powerful evil god who wanted to destroy the earth. He was gigantic, probably even bigger than Galaximus. People were trying to fight back against this being, but they kept getting transformed into trophies and dying. One day, however, something appeared that changed everything: The Super Smash Ball. It fought with the evil powerful being for a long time, until the Super Smash Ball eventually finally won...That would be, except his two gloved hands survived the impact from the Super Smash Ball's final attack. The evil being did one last ditch effort before finally dying: He transferred his mind to one hand, and he transferred his power to another hand. They both gained sentience and became: Master Hand and Crazy Hand. Master Hand is the one who was more sensible but weaker in pure strength and Crazy Hand is the dumb but powerful one.

Master Hand also got a bit more than Crazy Hand: He got a lot of DARKNESS in him. When Master Hand is enraged, he transforms into the mighty Master Core. Master Core has many forms, and all the forms were things the evil god killed, such as scorpions and people and even sentient swords. Master Core's final form is also a Smash Ball, the one thing the evil god failed to destroy.

Master Hand gladly made a deal with him for 5000G. However, when the plan went how they didn't want it to, Flowey abandoned Master Hand.

No pictures for now! 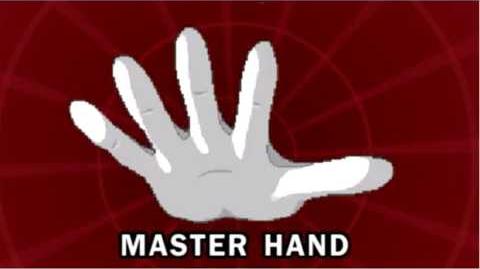 Retrieved from "https://in-a-locked-room.fandom.com/wiki/Master_Hand?oldid=201982"
Community content is available under CC-BY-SA unless otherwise noted.