Lives in a cave on Ooo

To make her own concert

Marcy is a character from the In a Locked Room thread.

Marceline has light blue-gray skin, crooked fangs, and long, midnight black hair that reaches to her feet. She also sports two marks on her neck, which are the marks of the bite that turned her into a vampire. She also has a tongue that is forked but sometimes her tongue looks normal and it might be part of her powers since she has shape shifting powers to make her tongue look forked or normal.

Despite being over a thousand years old, her appearance and personality is that of a 18 to 20[citation needed] year old.

In the episode "Go With Me", her hair is shaved into an undercut, which reveals that she has pointy ears. She is very thin and sometimes appears to be thinner than Princess Bubblegum; however, her shape can vary slightly depending on who is drawing her.[citation needed] She is usually floating in the air but when she stands next to the other main characters she is taller than they; however in "I Remember You", she was just at Ice King's size (or slightly shorter). In most of her transformations, she is shown to have green eyes.

Marceline's general appearance, particularly her blue-gray skin, fangs, and pointy ears, is an apparent result of her demonic heritage, and she shares all of these characteristics with her father. From Marceline's maternal side, the episode "Everything Stays" revealed that she possesses genes from a dark-skinned race, although evidently the phenotypes associated with these genes are recessive.

Marceline is described as a wild rocker girl. Centuries of wandering the Land of Ooo have made her a fearless daredevil. She is a lover of all things exotic and still travels across the land often. She has a mischievous personality and is rarely intimidated. Despite seeming evil in her first two appearances ("Evicted!" and "Henchman"), Marceline is a trickster at heart, and her "evil plans" often turn out to be nothing more than elaborate jokes. She is described by Finn as "a radical dame who likes to play games." She loves to play pranks on Finn and Jake. She also occasionally has violent outbursts, as shown in "It Came from the Nightosphere." Though during her line in the song, in "Evicted!" she stated that she was a thousand years old and had lost her moral code.

It is implied that some of her more malevolent traits are solely based on her vampire instincts. In "Red Starved", Marceline slowly becomes vicious and sinister after having been deprived of food, trying to tempt Jake so that she could eat him. In "Vamps About", Marceline was fine with Peppermint Butler creating weapons meant to kill her as a contingency, stating that she could have snapped and killed everyone at any given time.

She can also be sentimental. She was very emotionally attached to her teddy bear Hambo, which was given to her by Simon Petrikov; after Ash sold it to Maja, she was furious and broke up with him. Later, Princess Bubblegum got Hambo back in the episode "Sky Witch".

Marceline seems to be very emotional. For example, in "What Was Missing", she seemed to be more aggressive towards Princess Bubblegum than she usually is. She is also very independent, and in early episodes would often act without concern for Finn or his friends. It is easier for Marceline to express her feelings through music, as seen with the "Fry Song" and "I'm Just Your Problem," but has trouble expressing them otherwise. She keeps a diary that she uses for inspiration for songs as seen in "Marceline's Closet." When Marceline read the lyrics to "Remember You", the song that Simon Petrikov wrote for her, she began to cry.

Near the end of "The Dark Cloud", her personality changed slightly. Marceline had learned how to be more mature which is proved by her saying that she will be able to hang out with Princess Bubblegum "forever". She also said the learned how to be more empathetic to others too. Yet, it is still unknown if she got over her emptiness in the end.

Soul sucking: Marceline stated the only power her demon heritage granted her was the ability to suck souls, like her father. This allowed her to gain the specific abilities of vampires she had killed. She can also suck out still living souls, which she demonstrated jokingly on Jake when they were hunting vampires in "Stakes".

Levitation: She has the ability to float and even to fly with careful control and rapid speed. She can even sleep while floating, as shown in "Marceline's Closet". She obtained this power from The Fool. Pyrokinesis: She can light fire with only her mind, as seen in "Evicted!" when she lit up all the candles in the tree-house. Telekinesis: She can move things using her mind, as shown in "Evicted!" and "Daddy's Little Monster". She probably obtained this power from Vampire King.

Invisibility: She can turn invisible, as seen in "Heat Signature", "Bad Little Boy", "Red Starved", and "Princess Day". She obtained this power from The Empress.

Necromancy: She can raise spooky scary skeletons, as seen in "Henchman". Rapid healing: She appears to heal quickly from injuries, at least damage from sunlight, as shown once she was returned to the shade in "Henchman". Also in "What Was Missing" she was exposed to the sunlight in this episode, she quickly retreated and the wounds healed. She obtained this power from The Moon.

Shape-shifting: She has the ability to shape-shift into numerous monstrous forms, including a bat, a wolf, a reptilian creature, and a large tentacled monster. She can also use this power to copy things she can see, if she has time to study them, as shown in "Varmints". She obtained this power from The Hierophant.

Eating shades of red: Unlike traditional vampires, Marceline is capable of sustaining herself on "shades of red," such as the color in strawberries, rather than being limited to surviving on blood. She has claimed in her first appearance in "Evicted!" to "sometimes" consume blood, but this was not proved or referenced again until "Red Starved", in which she consumed the pink blood of Princess Bubblegum (who quickly revived herself with the Spoon of Prosperity). According to the note she left on her door in "Marceline's Closet", she gets lucid dreams when she eats tomatoes.

Communication with absorbed beings: As a result of absorbing the Vampire King's dark cloud half, she can now communicate with a miniature mental projection of the Vampire King.

Stylish Magic Clothing: Whenever she shape-shifts into a larger form, her clothes either grow with her, or are torn apart explosively. At times she appears to be able to preserve her clothing, even after changing into large forms that would cause it to break: in many appearances, the clothing disappears until she returns to her humanoid form, whereas in "Sky Witch", she performs numerous transformations while still wearing her outfit. In either case, her duds always reappear when she reverts to her normal form. 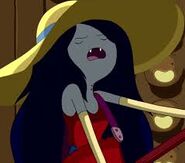 Add a photo to this gallery
Retrieved from "https://in-a-locked-room.fandom.com/wiki/Marcy?oldid=174287"
Community content is available under CC-BY-SA unless otherwise noted.