To save the world

To save the world

LRG Gang, everyone who isn't evil

Lair of the Dark Star

Kirby is a character in "In a Locked Room" who loves to eat food and can copy abilities. He can get along with anybody, and can make friends real easily... as long as the person that wants to be his friend isn't evil. He used to be role-played by The Planted AKEE, and is co-owned with SuperGaming101 and BF10. He used to be co-owned with Redfork2000.

Kirby was living peacefully one day in Dreamland, until he woke up in the 2nd part of "Lair of the Dark Star", the Season 1 finale, where he made his first appearance.

Kirby is very kind and innocent, having the personality of a baby. He is very child-like, and he doesn't seem to understand a lot of concepts, and he has much to learn. He loves food more than anything else.

Kirby of course, looks like a pink ball, with pink stubs for hands, and red feet that look like Jelly Beans. Kirby can copy abilities to change his appearence. For example, when he gains the sword ability, he wears a hat resembling what Link from The Legend of Zelda wears.

Kirby's relationship with King Dedede is quite complicated. King Dedede commonly steals the food of Dreamland, causing Kirby to get upset and to go after him, defeating him in battle. However, Kirby shows no hate for Dedede at all, and is only just friendly rivals with him, although Kirby does think of him as somewhat of a friend.

Despite Bandana Dee serving King Dedede, Kirby's rival, Kirby still considers him a friend and he enjoys his company. When Bandana Dee is not serving Dedede, he can be commonly seen hanging out with Kirby.

Prince Fluff considers Kirby his best friend, and often is on good levels most of the time. However, there are exceptions, often when it involves being pitted against his "enemies".

Kirby is one of the very few people who actually enjoys Kawasaki's food, and often can't get enough.

By The Planted AKEE 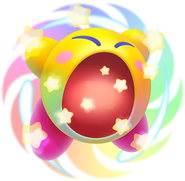 Kirby's powerful Hypernova form.
Add a photo to this gallery

Retrieved from "https://in-a-locked-room.fandom.com/wiki/Kirby?oldid=192129"
Community content is available under CC-BY-SA unless otherwise noted.