Eliminating Red Fork, proving to be superior than him

Has not died yet

Has not died yet

Red Fork, and anyone who gets in the way.

Advanced unicorn magical abilities, strong hand-to-hand combat. If he has all six elements of harmony, he can become Sun Fork-bot.

The same as Red Fork, but adding the ability to fly, shoot missiles and energy balls.

Being inferior to Red Fork

He considers no one as his friend

Red Fork X, a series based on My Little Pony: FIM

The Science of Metal Madness

Fork-bot is a robotic copy of Red Fork. He was created by Bright Spark, and he was made to equal Red Fork in every way, and eliminate him. He is roleplayed by Redfork2000.

Fork-bot's first appearance was in The Science of Metal Madness.

Opposite to Red Fork's joyful and laid-back personality, Fork-bot is cold, serious and evil. He is a heartless war machine who will never give up until he gets what he wants. He hates Red Fork, possibly even more than Bright Spark does, and will do anything to eliminate him once and for all.

Fork-bot was designed to be able to stand his own against Red Fork in combat, compete with the red unicorn and equal all of his abilites. As such, Fork-bot has an arsenal of dangerous abilities that he can use to destroy his enemies.

With all these abilities, Fork-bot is certainly a fearsome and menacing foe, who will destroy anyone who gets in the way of his objectives.

Relations with other characters

He is Fork-bot's creator. Fork-bot obeys Bright Spark's orders, specially when it involves fighting Red Fork. Bright Spark usually talks of Fork-bot as his greatest creation, and they work together pretty well.

In The Science of Metal Madness, Fork-bot attacked the gang and gave a good fight to stop them from collecting the elements of harmony. Since they are Red Fork's allies, and interfered with Fork-bot's plans of destroying Red Fork, Fork-bot considers them as enemies as well.

In Quest to Save Equestria, the gang encounters Fork-bot again, and the battle remains pretty similar to the first one. In different stories and episodes Fork-bot is fought over and over again. And while his rivalry is mostly towards Red Fork, he also shows a violent and aggressive attitude towards the rest of the gang. In stories like Daring Do and the Golden Orb or Unicorn Clash it can be seen that even without Red Fork being present, Fork-bot will still attack the gang, and won't hesitate to kill if necessary to achieve his goals. 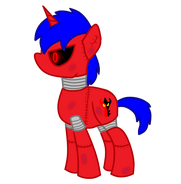 Version by ItzXenos.
Add a photo to this gallery

Retrieved from "https://in-a-locked-room.fandom.com/wiki/Fork-bot?oldid=190663"
Community content is available under CC-BY-SA unless otherwise noted.