Loud one of the Bunny Group; does not want to be touched; Active in adventuring

All bunny and electric opposers

Fairy Sunnylily is a bunny who only appears in Special Episodes of the series In a Locked Room. She is a notable member of the Bunny Group that regularly attends the Bunnies Only Party.

Not much is known about Fairy Sunnylily in the past, but it is confirmed that she never went to the Locked Rooms before. She is new to her homeland, only being present starting late April 2017. She loves to dress and wants to be a good artist in the future. She will need to learn more, especially when hanging out with other Bunnies and her gifted Enchanted Hollow, her den. However, such things like the "4th wall not existing in her place" will be further revealed. Fairy Sunnylily first appears in Locked Room Triple Deluxe, while the Bunnies Only Party started. She and the other bunnies are hopping in the main attraction to make statues appear, and the background glow. After a long chat, they all leave to their dens. She looks above and sees a vine that leads to Floralia, thinking that it would be a new kind of adventure. She climbs up with the sudden aid of the Warp Star, but ends up crashing on tall grass, and pushed by The Lumas. She introduces herself to the Locked Room gang, and requests them to introduce themselves in turn.

Fairy Sunnylily is seen to be talkative and loud, but does not cope up too well with the Bunny Group. She has a strong interest of adventures and chatting with one another. She wants to make friends that are not bunnies, and wants to at least discover a Heartstone of an animal. She is also known to lose control very easily when various things happen, such as gaining the Hypernova power.

The reason why Fairy Sunnylily dislikes to be touched is because she is too sensitive and will electrocute anybody near her. She also rapidly attacks enemies with her ears like a fighter, and can grab anything with light or medium weight. However, aside from those two attacks, she doesn't have much else, and if things go wrong, she flees quickly by hopping.

While it doesn't seem like it, she can fly but in a short amount of time, with the use of her ears. The way she does this is with them spinning, resembling a helicopter doing the same thing. 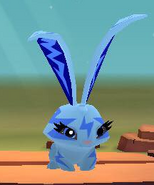 Retrieved from "https://in-a-locked-room.fandom.com/wiki/Fairy_Sunnylily?oldid=174306"
Community content is available under CC-BY-SA unless otherwise noted.