Evil8-bit duck is Duck but brainwashed by Colin the Computer. He attempted to kill Red Guy with a knife.

He appears a lot like Duck, except he is very pixelated and he has a evil grin, with sharp teeth.

evil8-bitduck has no personality, as he is brainwashed by Colin. The only known thing about his personality that he likes evil things.

In the Locked Rooms

He was Duck, but he got brainwashed by Colin in the digital world and tried to kill Red Guy with a knife. 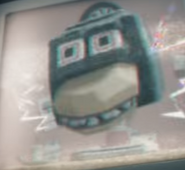 evil-8bitduck's head
Add a photo to this gallery
Retrieved from "https://in-a-locked-room.fandom.com/wiki/Evil8-bitduck?oldid=181231"
Community content is available under CC-BY-SA unless otherwise noted.