Unknown, likely in his fifties.

Most of the gang, but particularly Sonic the Hedgehog, Tails, Knuckles the Echinda and Mario.

Treading on a Lost World

Doctor Ivo "Eggman" Robotnik (Usually referred to as just "Dr. Eggman") is an upcoming character in the In A Locked Room series, set to appear in Treading on a Lost World.

Taken from Eggman the Sonic Wiki.

Eggman is a short-tempered, raucous, pompous, cruel evil genius who is constantly planning to take over the world. His primary motivation throughout most games is his psychotic belief of self-entitlement. Arrogant and narcissistic, he constructs countless technological wonders in his own image to fuel his massive ego, usually reinforced by his goal of finally constructing the Eggman Empire, and doesn't care where it starts.

Although Eggman is a villain, he helps Sonic when the world is at stake; though the reason is always because he knows there would be nothing left for him to conquer if the planet was destroyed. In some of his incarnations, he actually displays a begrudging respect of his arch-enemy, Sonic.

Despite his intelligence, Eggman can be very immature, throwing temper tantrums when Sonic manages to wreck into his plans. An example of his immaturity is in the ending of Sonic Unleashed, when Orbot begins to insult him over his constant failures and calls him a loser; Eggman screams "Oh, shut up!!", attempts to kick him only to comically fail, and then chases him through the desert.

This egg-headed scientist desires nothing more than world domination! Constructing an army of robots that'd rival even Necrola's, Dr. Eggman desires to take hold of the Chaos Emeralds, and possibly even the Master Emerald! Sure, Sonic the Hedgehog is around to stop him, but one slip-up that gets this brainy beast the emeralds is sure enough one that'll ruin everything!

Dr. Eggman started off as "Doctor Ovi Kintobor", where he originally intended to purge Mobius of all evil with the Chaos Emeralds. However, he was only able to find six of them, with the seventh being protected by Knuckles the Echinda. After a freak lab accident, Kintobor was soaked in chaos energy produced by the machine he forged to use the emeralds, causing him to grow evil.

More will be added once Treading on a Lost World is released. 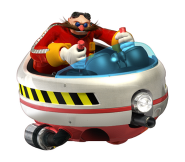 Eggman in the Egg Mobile
Add a photo to this gallery

Retrieved from "https://in-a-locked-room.fandom.com/wiki/Dr._Eggman?oldid=188361"
Community content is available under CC-BY-SA unless otherwise noted.