Dino Piranha is an antagonist introduced in The Room of Super Mario Galaxy. He appeared as an egg at first, but was cracked open thanks to his tail. He was swiftly defeated, but will soon return as CRUNCH, a killer robot nearly identical to Fiery Dino Piranha. He has no specific player.

The gang was in Good Egg galaxy, seeking down Bowser and Necrola, when they found an enormous egg. They landed on it when launching to his planet, awakening him. He eventually broke free, revealing himself. Yarrow got the idea to use his balled tail against him, hitting him with it three times and ultimately defeating him. Near the end of the room, Necrola will find his corpse, and turn him into CRUNCH, then return him to Melty Molten Galaxy for another showdown with the gang.

Dino Piranha has no known abilities, as he was killed very quickly.

Dino Piranha in his egg 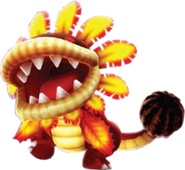 Dino Piranha as CRUNCH
Add a photo to this gallery

Retrieved from "https://in-a-locked-room.fandom.com/wiki/Dino_Piranha?oldid=181227"
Community content is available under CC-BY-SA unless otherwise noted.