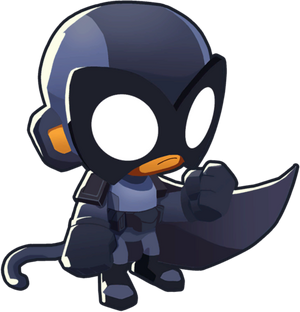 While locked into this form, Super Monkey is not capable of using a lot of his abilities. However, he does still have a few abilities to make up for it:

Dark Knight is the third upgrade on Super Monkey's bottom path in Bloons TD 6. Its default cost (In Medium mode) is $5500. The attacks do triple damage against M.O.A.B. class bloons, and have 3x pierce compared to regular darts. The monkey can be further upgraded to Dark Champion for $60,000, which gives it another glaive, further increases pierce and M.O.A.B. damage, and nullifies all bloon immunities, and can be even further upgraded into Legend of the Night for $240,000, which summons a black hole that prevents leaks for 7.5 seconds, and even further increases pierce and M.O.A.B. damage.

Retrieved from "https://in-a-locked-room.fandom.com/wiki/Dark_Knight_Super_Monkey?oldid=174379"
Community content is available under CC-BY-SA unless otherwise noted.