The Room of Mario Kart

Stare into the Dragon Soul

Dark Dracul was a mysterious character, one so mysterious that nobody knew his name for a while. Despite his dark demeanor, he was a good character.

Dark Dracul's morality was up in the air for a while, but he was often seen as a good guy, despite his dark appearance. He often went to The Room of Mario Kart to save princesses from the clutches of the koopas, but also had many other abilities. In The Room of IDFB, he also revealed that he knows some people who have the ability to "reset", an ability that Flowey the Flower knows about. For a while, Dracul was too scared to reveal his identity, as he feared that the glitch dimension would cause problems.

Nothing was really known about Dark Dracul until The Lair of the Dark Star. He generally stuck in the shadows and hides from everyone, but often emerged to help out others. He was most known for saving princesses in The Room of Mario Kart, but also liked to follow the gang and give them advice and warnings.

Before he was in the locked rooms, he was called Lucard, and was praised by others for his good deeds. However, he got cornered by Dark Star's glitches, and got trapped in the Glitch Dimension. When Dark Star tried to get him to join his forces, he refused, and was made into the nightmarish beast he was for the rest of his life. He eventually managed to break free of the dimension, but was hated and hunted for his evil appearance. He fled to the rooms and renamed himself Dark Dracul.

Since he is ambiguous, nobody knows what his affiliations with others were. However, he is stated to have saved princesses on a regular basis. 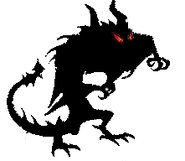 His appearance before being revealed
Add a photo to this gallery

Retrieved from "https://in-a-locked-room.fandom.com/wiki/Dark_Dracul?oldid=189848"
Community content is available under CC-BY-SA unless otherwise noted.