To seek vengeance against humanity

Has yet to appear

Chara Dreemur, her previous last name unknown, is a near-demonic vengeful spirit hellbent on revenge against humanity. She is owned by both SuperGaming101 and ItzXenos.

When Flowey first appeared, Chara began spying on The Gang.

Her first true appearance is in The Wacky Bob-omb Factory, where she attacks the gang, but before she can destroy them she is teleported into the room Here we Are by Sans.

PeaVZ108's depiction of Chara in his Second ABC Fanart Challenge

Chara's offical art in higher quality, without the red eyes. 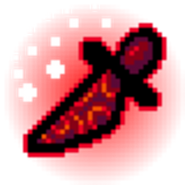 The Real Knife, Chara's main weapon.
Add a photo to this gallery

Retrieved from "https://in-a-locked-room.fandom.com/wiki/Chara?oldid=205919"
Community content is available under CC-BY-SA unless otherwise noted.