Fighting and training, being popular

Blaziken is a fire and fighting type Pokemon who enjoys heated battles. He is rivals with Charizard. He is played by SuperGaming101.

Blaziken has been particpating in fighting tournaments for a quite a long time. He appears in The Heated Battle, where he meets Charizard while training in a cave. The two face off, and Blaziken wins due to his mega form. Blaziken then ends up fighting Charizard in an tournament in the final match, and after an intense fight, Blaziken reluctantly calls it a draw.

Blaziken is very arrogent and confident in his abilities, proud of his strength. He is cocky and smug a lot of the time, often making light of his opponents. He likes to brag and show off his power, and he absolutely loves the attention of his fans, loving popularity. However, as shown in The Heated Battle, he can also get serious when he acknowledges that his opponent is a threat, which doesn't happen very often. 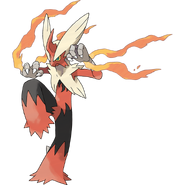 Blaziken's sprite from Pokemon Black & White.
Add a photo to this gallery

Pokemon Music Ash-Greninja Theme
Blaziken's battle theme B.
Add a photo to this gallery
Retrieved from "https://in-a-locked-room.fandom.com/wiki/Blaziken?oldid=205230"
Community content is available under CC-BY-SA unless otherwise noted.