When she is being a klutz

Amelia Amethyst is a main character originated from Quest of the Legendary Rainbow Gem. She is a novice witch from Atro City with a pure heart, despite still under training. She is roleplayed by PeaVZ108.

In "Diamond Disaster", Sean Sapphire grows doubtful of Amelia Amethyst's magic capabilities, given her background and failures in spell casting. Amelia Amethyst gets provoked and Kyoji speaks up for her. In the Underworld, Amelia Amethyst also finds it unbelievable when the fake Diana Diamond claims that she knows her magic, and thus comes to the conclusion that she is a fake. The real Diana Diamond also reveals that Amelia Amethyst used to live in Gemstonia with the other gemstones.

In "Rainbow Gem vs the Forces of Evil", Amelia Amethyst uses her magic wand to track down Shogo the Warlord, helping Gary Garnet navigate his bomber plane (one of the OPhone Xtraordinary's transformations), annoying Shogo the Warlord in the process.

Amelia Amethyst seems to show gratitude to Kyoji, especially when the latter defends her by speaking up to Sean Sapphire.

The two do not really interact a lot, but they are shown to be good friends.

Amelia Amethyst is friendly to the gemstones, being somehow the only one not to be too deeply affected by their separation in the past.

Amelia Amethyst is more tolerant of Red Ruby's reckless behavior than anyone else in the gang, always believing that there is still goodness deep in him. However, after seeing the damage that Red Ruby has done all to satisfy his desires, Amelia had to face the hard truth that being kind and patient is not always the answer. In turn, she told Red the cold hard truth about why he is the way he is, which was something that made him snap out of his ill-bred thoughts.

Amelia Amethyst takes magic lessons from Twilight, and has shown to be a loyal student to the latter, always admiring her superior magic skills and willing to learn more.

Amelia Amethyst used to be best friends with Corolla, until she accidentally turned the latter into a human-gemstone hybrid. As a result, it scarred Corolla emotionally and destroyed her chances of pursuing her witchcraft career, causing her to grow bitter towards Amelia. The two reconcile once Corolla finds out that Amelia had been trying to help her all along, even if it took hundreds of years of failure.

Amelia Amethyst has pretty average stats, with power being her weakest stat as her magic does not seem to do much damage on its own. However, Amelia is pretty good at the support role thanks to her abundance of spells, which makes her pretty versatile on the battlefield as she boosts her allies. This also justifies her high defense stat as well, as her spells often involve protecting her allies from damage such as forcefields.

In IaLR: Tier Lists - Meet the Gemstones, Amelia Amethyst is an E tier character. Despite being able to use a variety of spells, her base stats are just average and are not as good as other low-tiers, thus preventing her from putting up much of a fight on her own. 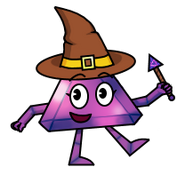 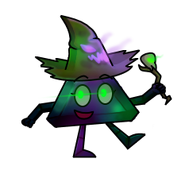 Retrieved from "https://in-a-locked-room.fandom.com/wiki/Amelia_Amethyst?oldid=205489"
Community content is available under CC-BY-SA unless otherwise noted.