In a relationship with Undyne

SuperGaming101
Alphys is a monster originating from the game Undertale. She is Gaster's nerdy lab assistant. She is owned by SuperGaming101.

Alphys was one of the many inhabits of the underground, taking the role of Royal Scientist after Gaster was erased from existance. Her most infamous experiment involved injecting deceased monster SOULs with determination. At first, the experiment seemed to be a success, as the monsters were brought back from the dead and were functioning properly. That changed when Alphys found that monsters cannot take a certain threshold of determination, and so the revived bodies began to break down and melt, fusing some of the monsters into horrific abominations, subjecting them to eternal pain and suffering. Alphys was horrified from this, and so she made sure that they never left her laboratory, and so she fed them herself. Alphys was filled with eternal guilt from this incident, and so she became self-loathing and depressed, hiding her secrets from everyone and constantly lying. When The Gang entered the Undertale universe via the Locked Rooms, monsterkind was transported to the IaLR universe somehow, and so the monsters made a home for themselves in that universe, including Alphys, who lives in Echo Creek.

A while after the monsters have settled in this universe, Sans and Papyrus had the idea of being wingmen for Undyne and Alphys, and while the two were a little bit reluctant at first, they eventually confessed their love for eachother and they became a couple. Alphys then let the amalgamates go from her lab back in The Room of Undertale, swearing to be more honest with others from then on. The amalgamates reunited with their families.

Alphys is a humanoid yellow lizard. She wears glasses and she can also be seen wearing a white lab coat most of the time. Her posture is also somewhat hunched over.

Alphys is known for being very introverted and shy, as she tends to spend a lot of her time staying inside and doing things such as watching anime or playing video games. Despite this, she still likes spending time with her friends, specifically Undyne, coming out of her shell. She is quite awkward in social interactions, stuttering being one of her habits. She is also quite insecure about herself, Alphys sometimes self-loathing. She tends to lie so that people see her as a better person or so that she doesn't hurt anyone's feelings, a habit that Alphys self-consciously knows is bad which she is trying to break, although she is starting to break this habit as well, thanks to the encouragement of her friends. She's also somewhat depressed, which mostly seems to stem from her guilt due to creating the Amalgamates with determination, although she does seem to show signs of improving.

Despite all of this, Alphys is very intelligent, her creation of Mettaton's body being a good example. Alphys has also benefitted Mettaton with two other forms, an EX form and a NEO form which is intended for combat. She is very analytical and she enjoys going on rants about things that she is passionate about. 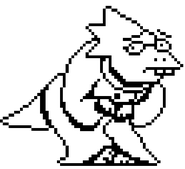 Alphys' offical art, with the Amalgamates behind her.
Add a photo to this gallery
Retrieved from "https://in-a-locked-room.fandom.com/wiki/Alphys?oldid=205631"
Community content is available under CC-BY-SA unless otherwise noted.